Rhinopristiformes are an order of rays that have shark-like features, such as having a finned tail instead of the whip tail possessed by other species of rays. This finned tail helps the rays with propulsion, as it does the same with other species that also possess finned tails. This order is known through a few common names, such as guitarfish, giant guitarfish, sawfish, etc. A notable feature about Rhinopristiformes is their body shape, for they have bodies similar to sharks, but also have flatter heads similar to those seen in other rays.

Rhinopristiformes are primarily a benthic species, living in shallow water along shorelines in the Atlantic, Pacific, and Indian Oceans. They prefer to live in tropical/subtropical regions. Unfortunately, due to the endangerment of many species in the order and their habit of not being long distance migrators, they are often stuck in specific geographic areas.

The population of many rhinopristiforme species is decreasing, and have a status of critically endangered. Threats to rhinopristiformes include residential and commercial development, mining and quarrying, temperature extremes, fishing, agricultural effluents, and dam usage. Some species have current conservation actions in place including areas of land and water protection, and in place education. Although, it is necessary to perform more research on this order and implement more conservation methods on all species like legislation. 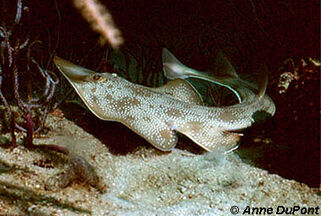 Defining Features: The Atlantic guitarfish can reach a maximum of 78cm in total length from snout, to tail. They have a triangular shaped front, with round tipped pectoral fins attached to the head(together this is the disc), and a long, robust tail that extends from the disc. Their mouth is located on the underside of their head. Atlantic guitarfish are grayish-brown, freckled heavily with white spots.

Range & Habitat: The Atlantic guitarfish enjoys warm shallow coastal environments such as, seagrass beds, reefs, and sandy bays. They can be found in depths up to 100ft.

IUCN Concern: vulnerable. There are currently no conservation methods in place for the atlantic guitarfish. 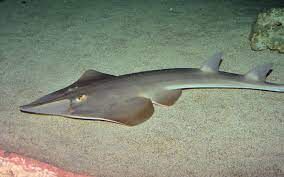 Defining Features: Their maximum body length is about 100 cm. They reproduce 1-14 small sharks at once. Their estimated lifespan is 10 years.They also have short tail fin. Their backs are brown with no spots. Their eye diameter is large, and blowholes are in shapes of oval. They have many teeth with small sizes. They have fine scales on dorsal and ventral surfaces. Their caudal fins are short, but the upper leaf is larger, the lower leaf is not prominent The whole part does not have engraving, but with low and wide round

Range & Habitat: The brown guitarfish live in the ocean with depth between 1 meter to 230 meters, including seas near China, Taiwan, Japan, and Korea. Governments establish conservations sites for them.

IUCN Concern: critically endangered. There are currently no conservation methods in place for the brown guitarfish.