Orectolobiformes are familiarly known as Carpet Sharks. They can be recognized by their piglike snouts and short mouths that are located completely in front of their eyes. Orectolobiformes have flattened body shapes and slender fins and tails. Their most unique features are spineless dorsal fins and fleshy protrusions on their nostrils, similar to catfish. Because of their smaller mouths, they feed on small fish and invertebrates such as: mollusks, tiny jellyfish, Annelidas (sea worms), and other crustaceans. Orectolobiformes can be viviparous or oviparous, meaning that they can give birth to live young or lay eggs. For example, female Stegostomatidaes (zebra sharks) can give birth to live young but are also capable of converting to asexual reproduction if it is unable to find a mate.

Orectolobiformes are deep water fish and typically reside on the sea floor off the coasts of beaches, intertidal coral, and rocky reefs to a depth up to 250 feet below the surface. Most sharks, including the Orectolobiformes, are nocturnal animals and typically become active and feed around nighttime. They have poor eyesight and use electro-sensory systems in their snout to detect food. Orectolobiformes can be found in warm, temperate, and tropical regions in the Atlantic, Pacific, and Indian oceans, near such areas as Australia, Brazil, Japan , New Zealand, Southern China, and western Africa.

Most Orectolobiformes have little interaction with humans, due to their deep sea habitat and lack of aggression towards humans. Wobbegong sharks are fished in Australia, though it is not enough to put them in any danger. Nearly all species that fall within the Orectolobiformes order are Least Concern or Near Threatened. However, the Zebra Shark (Stegostoma fasciatum), Whale Shark (Rhincodon typus), most sharks in the Hemiscylliidae family, and all species within the Ginglymostomatidae family range from Vulnurable to Critically Endangered. This is due to commercial fishing, where all of these sharks are either caught specifically, or as bycatch.

Orectolobiformes are most closely related to Carcharhiniformes, which are more commonly known as Ground sharks. Carcharhiniformes include the Blacktip shark (archarhinus [Aprionodon] limbatus) and Oceanic whitetip (Carcharhinus longimanus). Both genuses share two spineless dorsal fins, as well as similar mouth and gill shapes/placement.

Defining Features: The spotted wobbegong usually grows to around 150-180 centimeters, but can reach 320 cm in length. It ranges from a golden sandy to light green coloration with a dark saddle across its body and white ring patterns.

Range & Habitat: The spotted wobbegong is primarily found around Australia, in tropical waters no deeper than 218 meters, specifically within the western Pacific Ocean.

IUCN Concern: The species is a species of least concern, but is often caught as bycatch.

Defining Features: An extremely large (ranging from 18-33 ft.) shark belonging to the family Rhinodontidae. The whale shark can be well defined by its wide mouth, short snout, and the characteristic pale white spots and stripes arranged in vertical rows along the entirety of its blue-gray body. The first dorsal fin is placed approx. one dorsal length behind the rear tip of the pectoral fin, and the second is about half the height of the first, matching in size to the anal fin. Three prominent ridges run from the back of the gills to the base of the large caudal fin.

Range & Habitat: Whale sharks reside in tropical and warm-temperate seas and can be found in both deep and shallow coastal waters, as well as coral lagoons and reefs. Known to aggregate seasonally at feeding grounds, these gentle giants can be found in oceans near Australia, Maldives, South Africa, Belize, Mexico, Galapagos Islands, Southeast Asia, and Indonesia. 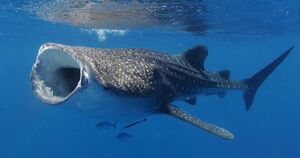 IUCN Concern: Unfortunately, whale sharks are listed as endangered on IUNC's red list. Population trends are decreasing- 75% of the whale shark population occurs in the Indo-Pacific, and it has been estimated that over the past 75 years, the Indo-Pacific population has reduced by about 63%. Threats are bycatch, fishing, and mortality by vessel strike.