Lamniformes are a very versatile group of elasmobranches, for they are found in many different locations within the ocean. They can be found along the coastline in shallow water, but they are also known for being quite the deep sea swimmers, being able to occupy both the epipelagic (surface - 200m) and mesopelagic (200m - 1000m) zones. There are even a few species within the Lamniform order that prefer to stay closer to the ocean floor.

The population of many lamniforme species is decreasing, and their status' range from least concern to endangered. Threats to the endangered lamniformes include fishing and harvesting aquatic resources, and shipping lanes in transportation and service corridors. For these species', more research must be performed to learn about population trends, harvest trends, and other information that will help with conservation. Efforts currently in place include some monitoring and legislation, but not for all species. To help the lamniformes survive, site/area protection, species management, and education programs must be implemented. 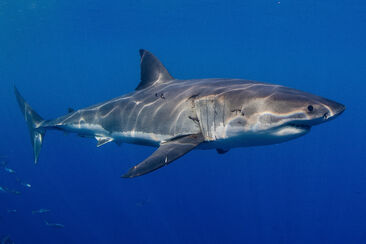 Defining Features: Great white sharks have a large, torpedo shaped body, reaching up to 20ft in length and potentially weigh up to several tons. They typically have light gray, or gray-brown skin with a white under belly. The irregular line of countershading often helps scientists to identify individuals.

Range & Habitat: The great white shark is present in almost all temperate coastal waters. They are often found located closer inshore, but do spend time in open water past the continental shelf during migration. White sharks are found anywhere from the oceans surface, to 1300m in depth.

IUCN Concern: This species is not of concern, they are often caught and released with a high rate of survival. 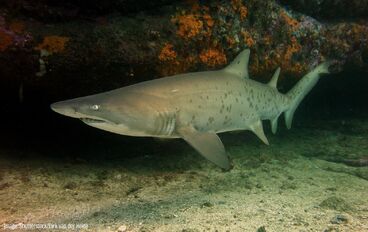 Defining Features: Sand tiger sharks grow to be a maximum of about 10ft, and average at a weight of about 200lb as an adult. They are brown, or tan in color with white undersides. Juveniles are often freckled with dark spots. Sand Tigers are commonly known for their jagged, curved teeth, gaining the nickname raggedtooth shark.

Range & Habitat: Sand Tigers live in coastal environments along with shallow bays, and temperate, or sub-tropical rocky reefs offshore. Although they most often reside in shallow waters, sand tiger sharks can be found in depths up to more than 650ft.

IUCN Concern: This species has been facing a decline in population over the years. Efforts by fisheries in a number of countries, including the US, have helped to protect the species.

Example Species in the Gulf of Maine[] 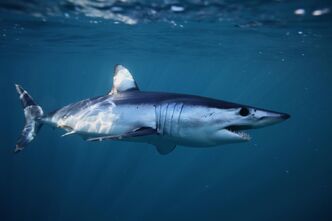 Defining Features: Isurus oxyrinchus has blue back and white belly. They also have smooth and slender body shape. In addition, its first dorsal fin is much larger than the second one. From behavior, they have an amazing speed in water. Commonly, male Isurus oxyrinchus has a body length of 2 meters, but female individuals’ body length are about 0.7 meters shorter, which is about 1.3 meters.

Range & Habitat: The mako sharks live in Epipelagic and Mesopelagic part of the tropical and warm-temperate seas to depths of 888 meters.Also, they are not likely to be found in water with temperatures lower than 16 degrees Celsius

IUCN Concern: Mako shark are endangered. These  sharks are now subject to trade controls. Also, government sets up at least one conservation area for mako sharks.

The Shark and Ray Field Guide: shark pictures and information about sharks and rays (elasmodiver.com)