Hexanchiformes are recognized by their slender, eel-like bodies and snake-like heads. Some species have stockier bodies and blunt snouts. They also have distinctive large reflective green eyes, and a terminal mouth with small teeth on both jaws. Their most unique feature is their six to seven gill slits with frilly margins (most other sharks have five gill slits). They are dark to light gray on top, with colors fading to a white underneath body. Hexanchifornes have a small doral fin far along its back. Little is known about their diet, though scientists believe they feed on small to medium sized bony fish. They are ovoviviparous (meaning they produce eggs that are fertilized internally in the female and the embryo develops internally as well), delievering live young in litter sizes up to 13 pups, with each pup measuring about 17 inches at birth.

Hexanchifornes are deep water fish, living at depths between 295 - 1970 feet. They sometime may move more to the surface at night. They have a wide range throughout the world, in the deep waters of all the major temperate Oceans. In the Atlantic Ocean, they have been found in the western areas near Mexico to Costa Rica, and in the eastern Ocean from France to Morocco. In the Pacific Ocean, they have been found near Japan, Taiwan and the Philippines as well as Australia. They have also been found in the Indian Ocean near the eastern/southern coasts of Africa. 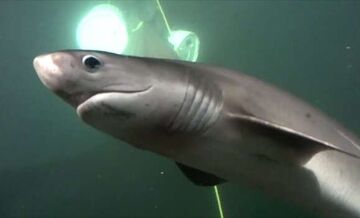 Defining Features: This shark is similar in shape to other Hexanchiformes, but is heavy bodied and large. Matching its title, this shark has six gills as well as a blunt, rounded snout, and six broad, saw-like teeth on each side of its lower jaw. It has a single dorsal fin, almost level with the rear tips of its pelvic fins. Grayish-brown coloring on the back, fading toward the lighter belly. Eyes are green colored. Fun fact: sharks such as these are often referred to as "cow sharks", because they are large, slow moving, and not torpedo shaped or streamlined.

Range & Habitat: This is a deepwater species, meaning they are often found in continental/insular shelves as well as canyons and upper slopes. During the day, they usually rest at the bottom (up to 6500 ft), coming up at night or moving to shallower waters to feed.

IUCN Concern: This population is listed as Near Threatened on IUCN's Red List. While the depths at which they reside make it hard to study population trends and movements, it can be said that their numbers are decreasing. The assessment has shown that Bluntnose populations have reduced about 29% over the past three generations, and will continue to do so without stricter plans to recover and conserve the species. 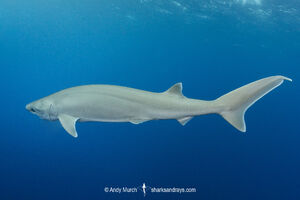 Defining Features: This cow shark differs from other Hexanchiformes with its smaller size and more pointed snout. The characteristic six gill slits, large green eyes, and single dorsal fin are present. Coloration is brown or gray, and margins on the posterior ends of all fins are a white or pale color. Its ventral side is pale as well. It's teeth are similar to the Bluntnose, with five broad saw-like teeth on each side of the lower jaw.

Range & Habitat: Resides in deeper waters, like other Hexanchiformes. They occasionally near the surface and swim in tropical seas like the Gulf of Mexico and the Caribbean, occurring mainly in insular and continental shelves (at depths of 90-701 m).

IUCN Concern: They are listed as a species of Least Concern on the Red List. No specific conservation actions have been taken, as it is expected to be stable (there is not much of a fishing threat in its wide depth range).

Example Species in the Gulf of Maine[] 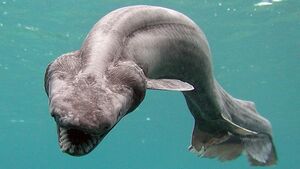 Defining Features: This shark has the shape of an eel (elongated), a very short snout, and large mouth- with widely spaced, needle-like, slender teeth. They have the distinguishing Hexanchiformes traits: a single dorsal fin and six gill slits (the gills are "frilly" and the ends of the first pair connect under the throat, collar-like).

Range & Habitat: These sharks are benthic, as are most Hexanchiformes. Quite rare, although they may be occasionally seen at the surface. Residing near the sea floor, they occur in waters over continental and insular shelves and have wide (and patchy) distribution in the Atlantic and Pacific Oceans. It has been reported from waters off New England.

IUCN Concern: On the IUCN Red List, this species is of least concern, for many of the same reasons as the Atlantic Sixgill Shark. As they inhabit the deep, it is less likely that they would come into contact with fishing threats. IUCN makes it clear that they are a very rare species and will be much more sensitive to exploitation, so fisheries should be carefully monitored.